“Slaughterhouse Rock” plays like a mash-up of two 80’s horror classics, “Demons” and “A Nightmare On Elm Street”. The film features a pretty cool soundtrack by Devo and a special appearance of “Mickey” singer Toni Basil. The film is marketed like a “Rock & Roll” horror flick, which is misleading. 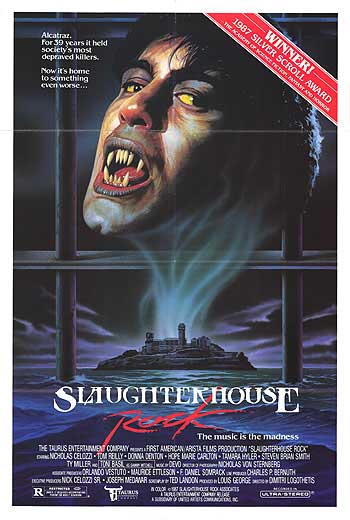 The film opens with a tour group being slaughtered after a metal band (led by Basil) unleashes a demon on Alcatraz. Soon a college student named Alex begins having nightmares about the slaughter and the demon responsible. On the advice of his therapist, he and his friends travel to Alcatraz is hopes of curing his night terrors…mayhem and demons ensue. 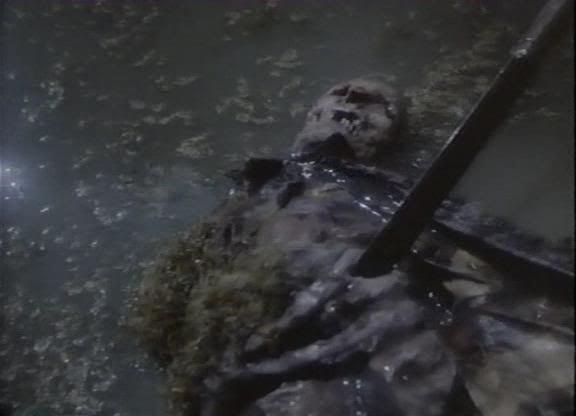 The first half of “Slaughterhouse Rock” plays like a ‘rubber reality’ horror film. Our main character Alex constantly has nightmares that seem to alter reality. The second half of the film plays like Lamberto Bava’s “Demons”, with Alex’s friends becoming possessed and murdered one by one on The Rock. If that description makes the film sound interesting, then I apologize because “Slaughterhouse Rock” never elevates past mediocrity. 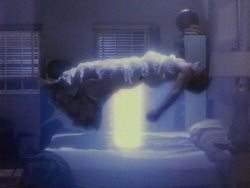 The story is shit, the acting is shit, and the death scenes are pretty lame. This film has to feature some of the least appealing and likeable characters I’ve ever seen in a horror flick. I really cared less who lived and who died. And while I was watching “Slaughterhouse Rock” I started to wonder if I was watching a crappy American remake of “Demons”. 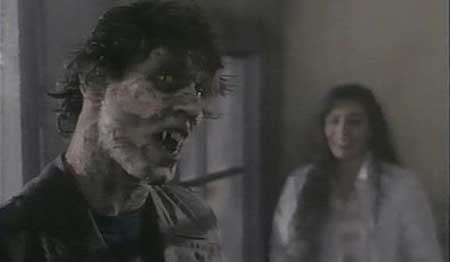 The film isn’t without some positives though. Toni Basil performs an awesome 80’s dance, the film has some good nightmare sequences, and the Devo soundtrack almost makes you forget how non-thrilling the film is. The film isn’t trash but it isn’t worth track down either. It’s somewhere between enthusiastic and redundant.